Interview With A Vampire: Damien Molony – Being Human Series 5 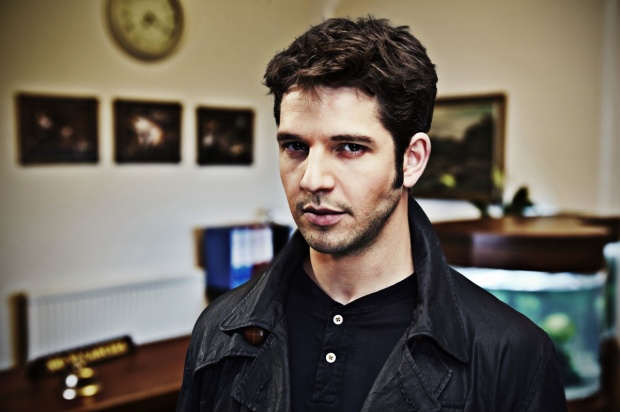 What’s happening at the beginning of the new series?

At the beginning of Series Five, Hal is pretty much where we left him. He’s tied to a chair, off the blood, but the only real difference is he’s been here for a while, so he’s got a beard, he’s sweaty and craving blood. The house is a complete mess. Alex is tearing things open looking for taste, looking for smells… any kind of sensation really that she now can’t have because she’s a ghost. Tom is just getting all kinds of takeaways and destroying the house in front of Hal’s eyes. So Hal is desperate to get out and clean it up, to bring some order and control to the house but the horrible thing is he doesn’t trust himself because he might go back on the blood.

What’s going between Hal and Alex?

Hal and Alex met in such intimate circumstances. They fancied each other, and ended up on a date, but when Alex was murdered, it was her blood he drank and caused him to fall off the wagon. Since she returned as a ghost and is living at Honolulu Heights, Hal sees Alex every day of every week and he’s reminded of his monstrous side and his evil capabilities. She represents everything Hal is running away from but on the flip side, there is still a connection between them, but I think Hal finds it easier to push her away – it makes it easier for him to cope with the guilt of what he’s done to her.

There is a real sense of your characters being quite alone despite being surrounded by other supernaturals. How do you think that impacts on Hal?

The beauty of Being Human is really the story of three best mates living together but they’re three normal people who have been afflicted with a curse: there’s the vampire who is addicted to blood and killing people; the ghost who can make no relationships with anyone in the outside world and the werewolf whose curse turns him into a monster and he’s completely incapable of controlling it.

We’re living together and helping each other with our individual problems, but all we want is to blend into society and belong to this human world that is growing up around us. And, every single relationship that each of our characters seems to develop in the outside world usually ends up in someone being killed, or someone getting their heart broken. So it’s a really difficult life for these three young people to have and I think that’s really why the show works so well. No one’s life is perfect and no one is the perfect human being and these three best mates are trying to belong to a world that doesn’t necessarily want them

What are you up against now that the Old Ones are gone?

What was great with Series Four was the impending doom of the Old Ones and constantly waiting for the inevitable to happen? With Series Five, it’s a lot more subtle, which is really exciting, because the three of us have this amazing relationship in the house and trying to get along, trying to be human and do our day-to-day jobs at the hotel. But we don’t realise that this person called Captain Hatch, who’s played by Phil Davis, is slowly but surely and deviously taking over the world under our very noses. We really only begin it figure it out much later, but by then it’s almost too late.

Filming scenes with Phil Davis was great. Sometimes, you wouldn’t even know he was in the scene because there were no lines on the call sheet, but then there he was in his little wheelchair, looking disgusting and it just says, ‘Captain Hatch arches an eyebrow’ and it’s really terrifying! It makes it all the more exciting because it’s Phil, but also because he plays Hatch to perfection.

What makes Being Human so watchable even after five series?

You can have all the special effects in the world, you can have the greatest sets and locations and exotic places to film in, but at the heart of Being Human is three extraordinary characters. Maybe what makes Being Human appealing to so many people is the genuine escapism of watching a vampire, a werewolf and ghost living together on Barry Island. It’s bizarre, but at the same time, these are, hopefully, real people with real problems. So yes, Hal is a vampire, but he’s addicted to something and it’s an addiction that causes a lot of pain in other people as well as himself. They are supernatural characters, but at the heart of them are real people struggling with really, everyday human problems and the show has a way of relating to the people who watch, because it deals with problems through the escapism but it’s still relevant to them.