‘If You Don’t Let Us Dream, We Won’t Let You Sleep’ Theatre Review

‘If You Don’t Let Us Dream, We Won’t Let You Sleep’, written by Anders Lustgarten, directed by Simon Godwin.

Political activist turned playwright, Anders Lustgarten, took the title ‘If You Don’t Let Us Dream, We Won’t Let You Sleep’ from the Spanish ‘Indignatos’ movement from which the ‘Occupy’ movement was born. In his own words “I wrote it to make you feel, and therefore think.” It is short, only 75 minutes long, written in two parts but performed without an interval.

In this production – the play’s first – a small cast of only 8 played all 21 characters between them, effortlessly and convincingly switching from one to the next, with Damien taking the parts of a workman and Jason, an angry, disenfranchised young man in the first part, and Ray, a dynamic member of a protest group in part two.

Part one is a series of short, sharp scenes presenting the city’s manipulation of money markets, and how the lives and relationships of ordinary people are adversely affected by putting profits first. The intertwining stories of these people are powerful, touching and desperate, but told with enough humour to be entertaining.

There are three main characters who we follow throughout the play; Joan (Susan Brown), a retired nurse who has a tax debt meter fitted in her home, despite being unable to afford the levy, Ryan (Daniel Kendrick), a young man whose ambition to go to university is trampled by a system which will benefit if he ‘re-offends’ after becoming implicated in a burglary committed by his friend Jason, and McDonald (Lucian Msamati), an African immigrant with an engineering degree who is working as a cleaner in a pub. The financiers plot how to wring as much money as they can out of the system by ensuring that they can profit from social discord. Meanwhile Joan is refused hospital treatment in order to minimise waiting lists, McDonald is stabbed in a racist attack which lands Ryan back in prison and a child is abandoned at a nursery because her father has lost his job.

Part two addresses the reasons why people should reject the notion that society is responsible for national debt and offers the possibility of alternatives. Joan and Ryan come together with a group of anti-capitalist protesters who intend to hold a show-trial of the system in an abandoned courtroom – their shared agenda, sense of purpose and camaraderie contrasting sharply with the discord and despondency of part one. McDonald, now working as a health and safety officer, threatens to thwart their plans by having the building declared unfit.

In Simon Godwin’s production the bare black stage with the performance area marked out by scaffolding afforded a bleak reflection of austerity, and the short scenes interspersed with noisy, frenetic set changes dressed minimally with just a few props gave the first half a fast paced and anarchic atmosphere. In contrast, part two is set in one scene, and the addition of a door at the back of the stage effectively broke up the blackness, creating a more intimate space, with the set gradually developing as the actors prepared the room for ‘The Court of Public Opinion’, generating a less confrontational and more optimistic vibe.

Damien’s first appearance was fairly brief, as the ‘workman’ who fitted Joan’s meter. Clearly uncomfortable in his work, he tries to ignore Joan’s objections, until he eventually feels driven to make excuses for himself; after a long period of unemployment feeling useless and unable to support his wife, three kids and his nan it seemed the only option open to him. When the meter begins to beep he offers Joan some money, aware that she cannot afford to pay it herself – an act made more poignant by the suggestion that it is his daughter who is later abandoned at the nursery after he loses his job. Although his appearance was fairly fleeting, Damien created a likeable, sympathetic character, whose attempts to avoid engaging with Joan bought about the first laugh-out loud moment of the night.

We meet Ryan’s friend Jason, Damien’s second part, in the pub shouting obscenities at the football on TV. He feels disenfranchised and has no aspirations, no purpose or hope for the future which makes him angry, aggressive, and volatile, even towards his own friends. It is however, McDonald who is the main focus of his hatred and at whom he directs a tirade of racist abuse. This was the most powerful scene of the whole play, and while Damien’s portrayal of Jason was convincingly hostile and vitriolic he still managed to convey Jason’s feelings of helplessness and inadequacy, not quite evincing sympathy, but generating a modicum of understanding for his situation.

In part 2, by far the longest scene in the play and including the whole cast, Damien played Ray. A charismatic career activist, he is the most developed of Damien’s three characters. Ray shares Jason’s feelings of alienation and frustration. Unlike Ray his dissatisfaction is directed against the system, and he puts his energy into trying to effect change, although he is stubborn and hot-headed – more interested in direct action than sitting in meetings. Damien played Ray with passion and conviction – a heartfelt speech about the economic situation in Ireland being an obvious example. However, despite his tendency to rant and swagger, there was also a vulnerability about Ray, a need to be liked, and a desire to be part of a group, demonstrated during his exchange with his ‘girlfriend’ Kelly (Laura Elphinstone), which made him rather endearing. 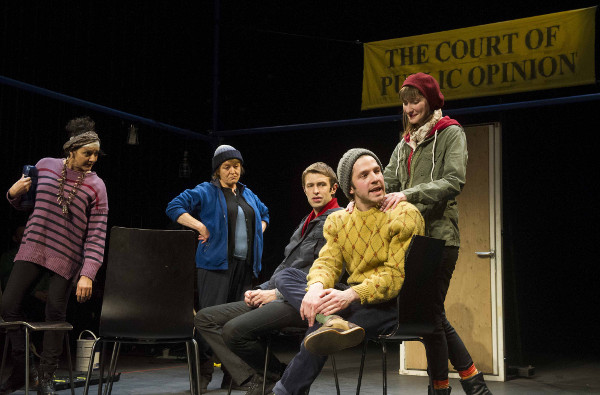 Damien convincingly created three very distinct identities for these characters, each one compelling and to some extent sympathetic whilst not necessarily being likeable – impressive in a play where the characters are primarily a conduit for a political message.

Did you see Damien in ‘If You Don’t Let Us Dream We Won’t Let You Sleep’? Come and give us your review and discuss with other fans here

‘If You Don’t Let Us Dream, We Won’t Let You Sleep’ Trailer

Damien Molony Appearing in ‘If You Don’t Let Us Dream, We Won’t Let You Sleep’ at the Royal Court Theatre, 15 February – 9 March