A young woman is murdered after giving birth in hospital, with the resulting investigation leading the men of H-Division into the world of the Victorian freak show after discovering she had a vestigial tail. Inspector Reid (Matthew Macfadyen) seeks the advice of Joseph Merrick (Joseph Drake) – introduced in the first episode – who becomes central not only to this investigation but falls victim to the hideous workings of K-Division Inspector Jedediah Shine (Joseph Mawle). New Recruit Detective Constable Flight (Damien Molony) has more of an impact on events than he or his superiors realise.

The second episode of Ripper Street series 2 saw the debut of Damien Molony as Detective Constable Albert Flight, a keen and somewhat arrogant young man with a glowing reputation, brought to H-Division by Chief Inspector Abberline (Clive Russell) as “reinforcements” for the police department struggling under the strain of growing lawlessness on the Whitechapel streets.

Abberline informs an unimpressed Inspector Reid of Albert Flights’ credentials and reveals a glimpse of his back story in the process:

This one, Detective Constable Flight, worked overtime, in uniform, on his own coin, his collar rate in so doing sufficient to push yours and mine into the corner….and now appoint to the CID he wishes to work here, he volunteers for this sink Edmund, for Whitechapel.”

No time is wasted in establishing the dynamic between the new arrival and the three main characters; Reid protests against having “another boy” his employ, young Dick Hobbs still weighing on his mind (and perhaps his conscience) as it becomes clear he is far from happy about the new recruit, whilst Captain Jackson and Sergeant Drake look on with no small measure of amusement at the cockiness of the new recruit.

DC Flight lights up in H-Division

Not intimidated the frosty reception from his superior, Flight reveals himself to be an ambitious and self assured young man, with a swagger bordering on pomposity – all conveyed dialogue free by Molony with the same compelling nuance of facial expression that he brought to Hal in Being Human and the very effective use of a cigarette as prop – as he waits to be formally introduced to his new employer.
When Flight asks Captain Jackson (Adam Rothenberg) for a light for his cigarette and proceeds to blow smoke into his face, the reaction of Jackson and Sergeant Drake (Jerome Flynn) at his over-confidence marks the beginning of an almost eye-rolling playfulness rather than wariness from the two men.

The first exchange between Reid and Flight sets the scene for the rest of the episode, the cocksure new Detective Constable is challenged to prove himself to a less than convinced inspector:

Inspector Reid. It is an honour, I shan’t let you down. Sir.”

Flight is given research to do

Flight is given investigative paperwork tasks to do, but far from being on the periphery, the fruits of his research are central to the storyline, his chance to prove he is capable of more than office duties coming soon enough when Reid allows him to go on his first investigation to try and find John Goode (Tom Brooke), identified as the father of the missing child of the murdered Stella (Elva Trill). But his insistence on ignoring the advice of the more experienced Sergeant Drake who accompanies him, puts the two of them in danger and culminates in a black eye for Flight.

Flight ignores the advice of Drake

This same combination of well meaning keenness and acting upon his initiative, but being naive, lacking in experience and events ending disastrously, repeats itself for Flight with more devastating and heartbreaking consequences later in the episode, this time involving a twisty turny, altogether more emotional set of encounters with Joseph Merrick.

When Joseph makes his way to H-Division with important information for Reid, he becomes victim to a horrible mob attack outside H-Decision headquarters, Flight comes to his rescue, saving his life by helping him up when he falls onto his back on the pavement (which we know from earlier scenes will cause him to suffocate).

We are also given insight into Flight’s true nature when he makes an impromptu and impassioned speech which goes straight to the heart of the episode’s theme:

What is wrong with you? This man is your fellow! You would stone him? You, call him monster? Look on your own sins!”

Albeit a happy accident, Flight is then responsible for Merrick being in the right place at the right time, when he escorts him to the museum where Reid and Drake are in attendance, so he can talk down John Goode from killing himself and his baby in a suicide attempt.

Merrick does not only save two lives, but is also then able to reveal to Reid the important information that he had witnessed Jedediah Shine murdering his sergeant, a crime for which he was trying to implicate Reid himself. Flight earns a further show of trust from Reid, when he is asked to escort Merrick back to the hospital and keep guard outside his room.

Flight escorts Merrick back to his rooms

While on guard duty, in a tragic mirroring scene to when he saved Merrick from suffocating, Flight falls asleep, allowing Jedediah Shine to slip past him unnoticed and end Joseph’s life, by removing his pillows so he lay flat and passed away. Flight is not the perpetrator, and he merely fell asleep because he was up all night working and helping the case, but that all the joy in preceding events had culminated with such bitter, sorrowful irony, is the most heart-wrenching moment of the episode. 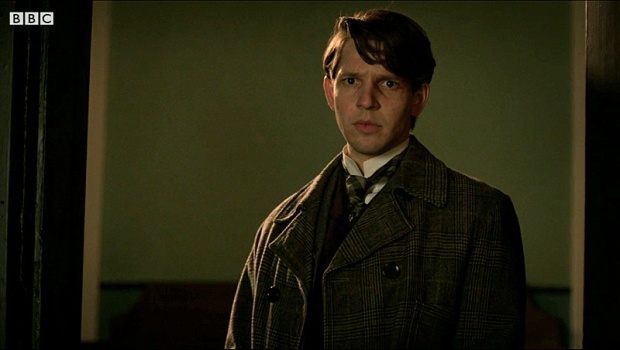 Flight takes in what has happened to Merrick

By the end of the episode Flight remains somewhat of an enigma, proving himself to be part good-hearted, brave hero; part sharp-minded, incisive maverick; part naively ambitious young man. He has already been instrumental to a major investigation and shown himself to be compassionate with a moral compass pointing towards goodness. The tragedy at the end of the episode – to which we are the only witnesses – also makes him the victim of his own dedication, and how this will effect him in the future we are yet to discover.

For an introductory episode, Damien had significant screen time, Flight playing a crucial part in events and the consequences of his final actions will add a compelling layer of tension for his future relationship with his Inspector as well as us the audience, as we follow his journey.

The first installment, beguiling and heartbreaking, fragile and fierce in equal measure, fast paced and intense, yet tender and subtle, is filled with the darkness of underground London and the light of the human heart. The real monsters have proven themselves to us, and so have those who are pure at heart.
Flight seems to be on the side of the latter, but his introduction was certainly dappled with shade.

To keep up with Ripper Street Damien news as it happens, join us at the Damien Molony Forum, on Twitter, Facebook and Tumblr

It’s A Wrap For Damien Molony on Ripper Street 2