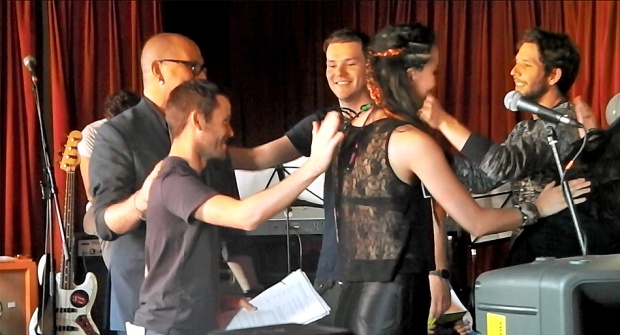 Damien is back on Radio 4 this Sunday in an exciting new radio version of Roddy Doyle’s ‘The Commitments’, as part of a week of programmes celebrating the authors work.
The book, the first in Roddy Doyle’s Barrytown trilogy of novels, has been famously made into a film and is currently enjoying huge success in London’s West end as a musical. Adapted by Eugene O’Brien, the radio drama is directed by Jim Sheridan and produced by Gemma McMullan,

The story is based on a working class band, ‘The Commitments’ on a mission to bring soul to Dublin in the late 1980s. Damien will be playing two parts, the pianist in the band, James ‘The Soul Surgeon’ Clifford and Niall Clancey from ‘Hot Press’ magazine.

The recording took place in Dublin on 23 – 24 September with an incredible cast, including Colm Meaney, Ronan Raftery, Devon Murray, Sarah Greene, Gavin Friday, Kate Stanley Brennan and Lloyd Cooney, with irish band ‘The Riptide Movement’ providing the music. We are delighted to be able to share a special glimpse of the actors making the recording, in the exclusive video footage below!

With huge thanks to BBC NI Radio Drama for providing us with the video footage and permission to share it.

The Commitments airs on BBC Radio 4, 3pm Sunday 15th December and again 9pm Sunday 21st December. You can listen online both live and on catch-up here.

Discuss Damien in ‘The Commitments’ with other fans, here!

Damien Molony joins cast for Radio version of ‘The Commitments