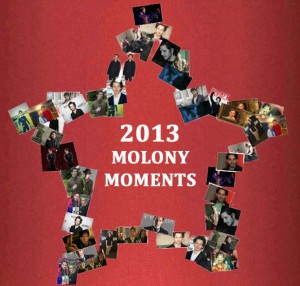 2013 has been filled to brimming with amazing Molony moments for both Damien and his fans. We have been gifted with another year of stunning performances from our favourite actor, with Damien appearing on TV, in theatre and on the radio, as well as a host of exciting events, promos and interviews and casting announcements for this and next year.

The Damien Molony Forum had its first birthday, ran an exciting competition and began our second year supporting Damien, bringing Molonians across the world the latest news on his work.

Below are the major Damien Molony highlights of the year.

January
The year began with Damien making his radio debut in ‘Student Stories’ on BBC Radio 4 on 4th January.

Feb – March
From 3 February – 10th March, starring alongside Michael Socha, Kate Bracken and Phil Davis, Damien blew fans and critics away with his portrayal of over 500 year old vampire Hal and his ultimate descent into his dark side in the apocalyptic final series of BBC Being Human.

From 15th February – 8th March Damien was back in the theatre appearing in Anders Lustgarten’s ‘If You Don’t Let Us Dream, We Won’t Let You Sleep’ with Daniel Kendrick and Meera Syal at the Royal Court Theatre, the play making the Channel 4 news.

April
April 8th saw the UK release of the Being Human Series 5 DVD, which included the much anticipated exclusive additional scene that changed the ending of the show forever and left the future of our three favourite supernaturals in the imaginations of the fans.

May
In May a photo on the internet sparked rumours of Damien being cast in BBC Victorian drama Ripper Street, with our first glimpse of him in costume on set. Damien’s casting was officially confirmed to the Forum on 23rd May.

June
After the BBC announced in June that Matt Smith was leaving the show, Damien emerged as a top favourite to play the next Doctor Who amongst fans, the media and the public, with consistent support in the interwebs, WHO related press and in betting odds. Since Peter Capaldi’s casting has been known, rumours have persisted of Damien appearing in the show, as either The Master or as ‘the new Rory’.

Damien’s voice was back on the radio on 3rd June when he starred alongside Fionnula Flannigan, in BBC NI Radio Drama production ‘The Hill Bachelors’, airing on BBC Radio 4.

As well as his acting work, for the past year Damien has continued his campaign for increasing blood donations, with an interview in Donor Magazine and some very persuasive tweeting 10th – 16th June to recruit more donors during National Blood Week.

Also in June, Damien did a triathlon for charity and fundraised on twitter for two important charities, raising £2,323.23.

From 13th July to 17th August, Being Human 5 finally aired on BBC America, with new promo and behind-the-scenes photos and goodies for us all to enjoy.

September
On September 25th it was announced that Damien was joining the cast of the radio version of The Commitments.

October
On 1st October in another WordTheatre performance for the 2013 Forward Prizes for poetry Damien read Dan O’Brien’s ‘The War Reporter’ and ‘The Coal Jetty’ by Sinéad Morrissey.

The first official Detective Albert Flight promo photo arrived on 8th October, shortly followed by the character profile and the Ripper Street Series 2 trailer on 17th October, giving us a tantalizing teaser of Damien’s character in Ripper Street as ‘man of secrets’.

November
After months of eager anticipation Damien was back on our telly boxes again for Ripper Street 2 starring alongside Matthew Macfadyen, Jerome Flynn, Adam Rothenberg and MyAnna Buring in episodes 2 – 8. For seven episodes we followed the suspenseful and intriguing journey of Detective Albert Flight, brought superbly to our screens by Damien from 4th November – 16th December.

The same night as his Ripper Street debut on 4th November Damien attended the ‘Cool Gothic and the New Vampire’ panel event at the BFI with Toby Whithouse (and other actors, writers and directors) to talk about all things Being Human, Hal, horror and the modern gothic on TV. The Damien Molony Forum had the privilege of doing the complete transcript of the whole event for the BFI.

On 5th November, Ripper Street HQ held a live Q & A on Twitter where Damien answered questions from fans, (including 3 from the forum!)

The following week on 11th November Damien was announced as the male lead in upcoming Original Channel 5 drama ‘Suspects’. He will be appearing in ten 1 hour episodes as Detective Sergeant Jack Weston in the fly on the wall / documentary style, semi-improvised cop drama early in 2014.

December
On December 15th Damien was back on BBC Radio 4 for the third time this year in the radio adaptation of Roddy Doyle’s ‘The Commitments’.

An early Christmas present arrived on 20th December when Damien was announced as being cast in Dan O’Brien’s ‘The Body of an American’ Which will run at both the Gate Theatre London and the Royal & Derngate Northampton early 2014.

We could not have done this without the input and support from some very lovely people who have shown us kindness and generosity in allowing us to share these with you all, most notably BBC NI Radio Drama, Tiger Aspect Productions and the BFI.

Our biggest gratitudes go to Damien for continuing to share his talent with the world and to his fans, who continue to appreciate it.

Huge thanks to all who have continued to read and support the Forum in 2013, here is to another year!

Do you have a favourite Molony moment of 2013? Maybe a particular performance on TV or perhaps you were lucky enough to see Damien on stage. Come and share your Molonian Memories with other fans at the forum and vote in our POLL here!