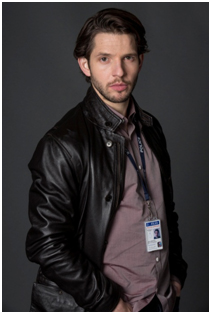 With Suspects making it’s UK premiere tomorrow on Channel 5, we are delighted to share an interview with Damien on the upcoming crime drama.
Check it out below for his insights into the show and his character D.S. Jack Weston, breaking the rules, getting the collar, sending cheeky texts, the contents of his desk, the “red mist”, croissants and more!


Who do you play in Suspects?

I play Detective Sergeant Jack Weston. He comes from a long line of police officers in Ireland, and has moved to London to join the police. He has very strong opinions about what’s right and wrong, and he’s very willing to cross certain boundaries, bend certain rules, if he believes that the end justifies the means.

What’s his relationship with the rest of the team?

Martha is his boss, and he is Charlie’s boss. He has to make sure he’s doing his own day-to-day job, as well as keeping an eye on the DCs, motivating his team, and then answering to Martha, making sure she’s up to speed with what’s happening. Jack has a responsibility to, sort of, coach Charlie and challenge her; to make her a better cop. He’s been tested and put through the wringer lots and lots of times by his superiors, when he was a DC and a PC, so he feels that that’s probably the best way to train someone. Charlie is very competent, so Jack is constantly impressed by her. But at the same time he’s looking out for her. As for his DI, Fay’s character, Martha, there is a lot of respect for her. He thinks she’s fantastic at what she does, but equally, if he thinks that she’s maybe missed something, maybe being too ‘by the book’, Jack isn’t afraid to say: ‘this needs to be done.’

How does that go down?

There have been a few times where Jack gets taken in and reprimanded for that. But you can’t really teach an old dog new tricks. Jack is too instinctive, and while he knows he’s not done the ‘right’ thing, getting in trouble with his superiors is not going to worry him too much if he’s the one who solves the case. Jack is emotional: his emotions often dictate his actions.

Did you speak to real police officers who behaved like that?

We spent a lot of time with police officers and detectives, both retired and still serving, researching the character and the world of the show. A lot of them spoke of the ‘red mist’. Police work these days, I gather, has lots of procedural elements to it. Lots of questions and paperwork and less time spent out on the beat. ‘Are you aware of what you’ve done?’ ‘This is why we’re taking you in, do you understand this?’ ‘Can you confirm your full name for me please, sir?’ But there are times, maybe, that during an arrest or a routine questioning where you get a slap in the face or a kick down below or something, and the ‘red mist’ comes down, and that’s it. All you want then is what the police call ‘the collar’. Getting the collar is always a great day.

Can you describe how the show is set up?

There is a very structured storyline – this is where the scene starts, this is where the scene ends; the scene must contain this information – but then, what happens when we’re filming the scene, is really up to the actors, the director and the cameraman, as the scene is being filmed, in the moment. That’s what will make it very exciting to watch, I think. It makes it very real.

It’s exhilarating. It’s a very, very exciting way to work as an actor, because, you read the story, you read the story again, you read the story a third time, and then it’s like, ‘OK, let’s start shooting and we’ll see what happens’. That was daunting, maybe a little scary at the start. I remember the day we started shooting, there was just a sense of kind of nervous excitement from everyone. But two days in, two scenes in and then suddenly it’s like, ‘Give me the storyline – let’s go, let’s go!’ It was a huge rush of adrenaline. We were all absolutely shattered when we finished shooting!

What sort of research did you do and what did you take from it?

We did a few weeks of intense workshops with a retired Detective Chief Inspector. A lot of interview technique, learning a lot of police terminology and general day-to-day lingo, because to make it look and sound real, you want to be very, very specific. We then spent several nights with working detectives in boroughs across London, which was really exciting, because you see them work, but we also got to see them in a slightly more relaxed environment. We inundated them with questions, anything from ‘What do you keep in your desk?’ to ‘Why did you want to become a police officer in the first place?’ From an acting point of view, and from a character point of view, what interests me are ‘private moments’, when you think you’re alone at your desk but the camera is secretly filming – if Martha and Charlie are in the DI’s office talking, am I trying to stuff a croissant into my mouth, or going through my emails, or sending a cheeky text to an ex-girlfriend – that kind of thing. What does a DS do when he thinks he’s on his own?

Did the set feel like a real police station?

The sets themselves were incredible: it was a fully-functioning office, no fake walls, a hugely reduced camera and sound department, so it did feel very much like we were working as police officers, and being followed around by a documentary crew. Sometimes we didn’t even know where the cameras were. The phones were all connected, the photocopiers, printers – everything. There were evidence boards, CCTV cameras, different offices, Martha’s office, our desks. Then, within the desks were handcuffs, or my police notepad or my lanyard… or a bottle of whiskey, something I think every police officer has stashed away. If they’ve ever messed up and need to apologise to a superior, it’s very handy to have a spare bottle in a gift bag. Jack’s had to give out quite a few bottles in his time as peace offerings, I’d imagine.

Is the audience to understand that it’s faux documentary – as if we’re seeing a documentary that’s being made?

Obviously it’s a drama, but it’s shot in a documentary style, so it’s this fly-on-the-wall kind of thing. It’s as if this camera crew have been given access to a police department for however many months, and they follow ten cases from the 999 call up until the case is solved. As well as your everyday work relationships playing out on camera, there’s also a relationship between the character and the camera itself, because as the character you’re thinking, ‘Why is there a camera following me, when I’m chasing a thief down an alleyway?’ I was really keen to explore that relationship when starting the job. Being aware that a documentary crew are there, I think that will hopefully add another level of reality to it.

And has it changed how you think about the police, and policing?

Oh, massively. I did have a big respect for the police anyway, but watching them work and getting to understand the type of day that they have, only increases that respect. A bad day at work for me, I’ll come home, I’ve messed up: shock-horror, I mispronounced one word in the scene today, and that’s hell on earth for me. Whereas a bad day for a DS often involves horrific things, rescuing women from a cellar, telling a family their son’s been killed, awful stuff. They have a very difficult job, no doubt about it.

Don’t miss the first episode of Suspects, 10pm on Wednesday 12th February only on Channel 5.