The detectives are back on the case this Wednesday 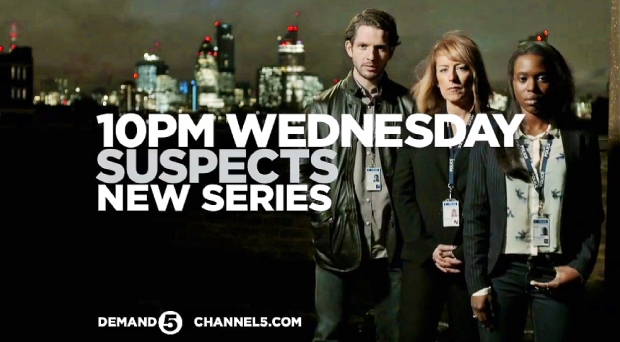 “Sarge” DS Jack Weston (Damien Molony), “Boss” DI Martha Bellamy (Fay Ripley) and DC Charlie Steele (Clare-Hope Ashitey) cracked the harrowing case of a missing 2 year old girl in the compelling first episode of Suspects and are back this Wednesday in episode 2 of the innovative cop drama, investigating a crime of a very different nature.

After a news report on the assault of a London night club owner, Jack and Charlie find themselves uncovering a far bigger story involving street drugs, with a few twists along the way. Back at headquarters Martha holds a press conference, the suspects are questioned and interviewed and the team examine the pieces of evidence, slowly putting them together to solve the case.

This week’s episode opens with a news report of an assault on the owner of the Green Pit nightclub in East London. When Jack and Charlie arrive to investigate, they find that the owner, Kirk Hawthorne, is not the only casualty. His sister Ziggy is found unconscious in the cellar, with blood pouring out of a head wound.
News from the hospital arrives. Kirk’s head wound is not serious, but Ziggy is suffering from a brain haemorrhage and also possibly a drugs overdose. Meanwhile, the detectives’ attempt to piece together what happened that night is hampered by the lack of the club’s security CCTV recorder, which has been removed from the premises.
Then a further report gives the case a new twist. Uniform have found 19-year-old student Tom Yeoman dead in an alley. In his pocket is a promotional flyer for the club and a wrap of white powder, which turns out to be PMA, the same drug that Ziggy took…
The suspects this week include the club’s security chief Dave Mastings – is he as adamantly anti-drugs as he claims? Bar manager Guy Ollerbury is a student – so how can he afford expensive skiing holidays? Ziggy’s friend and personal trainer Wakim Ahmed denies that he is her boyfriend, despite a statement to the contrary by Ziggy’s best friend at uni, Hannah Stevenson. Both were with Ziggy that night at the club. Finally, there is owner Kirk Hawthorne himself – the club has only recently reopened after being closed last year after drugs were found. Could he be turning a blind eye to the problem or even dealing himself?

Check out the Suspects episode 2 preview clip and trailer below.