Cracking the case and the sass factor: Suspects Episode 2 review 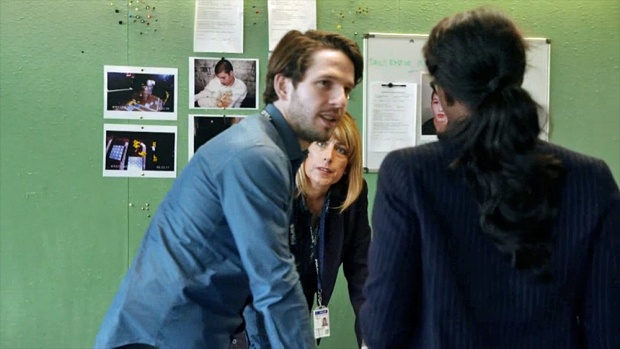 DS Jack Weston (Damien Molony) and DC Charlie Steele (Clare-Hope Ashitey) are called to the scene at a nightclub in the early hours of the morning to investigate an assault on the owner, Kirk Hawthorne (Robert Boulter). While there, the detectives also find his sister Ziggy collapsed, with a very serious head wound and the possibility of a drug overdose. When searching for clues as to what had happened, the CCTV camera is discovered missing, putting the security manager Dave Mastings (Craig Whittaker) under suspicion when his fingerprints are found all over the cables. When a 19 year old student is found dead in an alleyway with a flyer for the night club and a wrap of PMA in his pocket, the same drug as Ziggy took, the police suspect a connection. DI Martha Bellamy (Fay Ripley) holds a police press conference as the team pieces together the evidence and interview the suspects. Ziggy’s uni friends Hannah (Sabrina Bartlett) and Wakim (Dudley O’Shaughnessy), and bar manager Guy Ollerbury (Graham Butler) also appear on the detective’s radar, while the investigation uncovers some unexpected twists.

We may be biased, but the second episode of Channel 5 cop drama Suspects is a bit good.

In his television career so far, Damien has played a 500 year old vampire in supernatural drama Being Human and a Victorian Irishman in period drama Ripper Street. As fond as we Molonians are of those roles (and we are very fond indeed) Suspects is a contemporary drama, DS Jack Weston is bang up to date in his present day costume and dialogue, and the fundamental core of the show is it’s hyper-real foundation. Shot as a fly-on-the-wall mockumentary with the actors improvising their lines on the fly too, Suspects comes unapologetically at us as an edgy, ultra fresh, original-feeling, absorbing and believably realistic bit of drama.

There are no character backstories or subplots, but in this episode, while the case was not as intensely compelling as last week, the less tragic storyline made room for establishing the three main characters and exploring the detective team dynamic. The introduction of a more playful tone was galvanising to watch, some feisty and funny bits of dialogue providing incredible moments of pure entertainment and light relief, interspersed with the unfolding crime story.

From the very first scene, with witty banter and perhaps a hint of rivalry between the two, DS Jack and DC Charlie were trying to out-sass each other in an ongoing repartee that sustained throughout the episode.

Jack Weston shows himself to be a sharply insightful and perceptive detective (his quick thinking is key in solving the case), with an undeniable swagger to his authoritative self-assuredness and a kind of youthful rebelliousness, epitomised by one of this reviewer’s favourite moments of the episode, when he signs an official police form with “kiss, kiss, kiss”.

Charlie: “J Bomb knows what that is”
Jack: ” I haven’t sharked in a long time”
Martha: “Tell the old lady what sharking is? please?”

and Jack locating the whereabouts of the missing CCTV camera.

We also see more of Jack’s interviewing style, his contained intensity adding to the claustrophobic feel of the small interview rooms, effective in cracking the suspects and powerful to watch.

With each episode being a self-contained, discrete crime story, there are no ongoing storylines to keep longer term attention, or story arcs stretching across the series. But the camera intimately and almost viscerally brings us into the case as it follows the detectives everywhere – into the interview rooms, on location – seeming to involve us, the audience, in the present moment creative process as well, taking ‘drama’ itself to a whole new level.

Without the usual character subplots, we might also be tempted to think there would be no character development or character arcs in Suspects either, but this episode has proven otherwise. In fact it is the nuggets of character and team dynamics that are the most engaging, and by the end of the episode we are left wanting more.

All three leads deliver strong performances, giving us a clearer sense of who their characters are. But Damien brings a level of vivacity and undeniable coolness to Jack Weston, a young Detective Sergeant who really knows he knows his stuff, making his performance the most irresistible to watch.

We ‘suspect’ our ongoing investment will be not only in the ‘who dunnit’ crime story, and how it is investigated, but also in the detectives themselves and who will crack the case next time.

Suspects returns next Wednesday 26 February at 10 pm on channel 5.