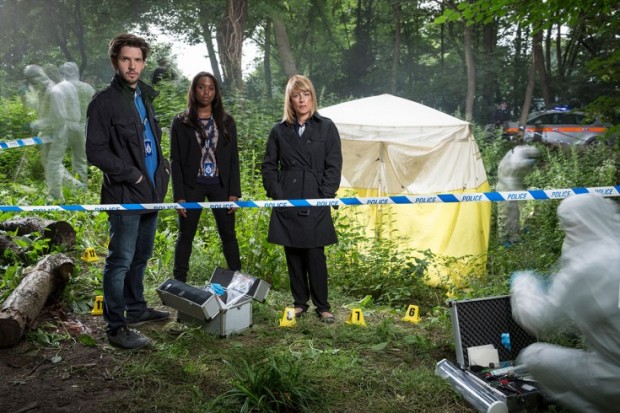 DS Jack Weston (Damien), DI Martha Bellamy (Fay Ripley) and DC Charlie Steele (Clare-Hope Ashitey) will be back on TV screens when Suspects returns to Channel 5 this Autumn, and the new series will premiere with a star-studded 2 part special.

The London based detective team in Channel 5’s homegrown crime drama will be joined in the opening episodes by a top line-up of guest stars: Charlie Brooks (Eastenders, I’m A Celebrity..Get Me Out Of Here), Dominic Power (Emmerdale, The Bill), Claire Cooper (Hollyoaks, Waking The Dead), Katie Jarvis (Fish Tank) and Luke Newberry (In The Flesh).

With the actor-improvised dialogue and ultra-real documentary style, Suspects has established itself as innovative and gripping drama, not afraid to address gritty and hard hitting themes. Details on the opening episodes of Series 2, via Geektown, reveal the new storylines will be no exception, when the detectives find themselves investigating a case of a sex game gone wrong.

Check out the synopsis for the 2 part special, below.

This two part special opens with barrister Jonathan Moxton found naked, tied up and covered in blood – it looks like a sex game has gone very wrong indeed. DI Martha Bellamy (Fay Ripley) and her team, DS Jack Weston (Damien Molony) and DC Charlotte ‘Charlie’ Steele (Clare-Hope Ashitey) soon suspect that it was actually a premeditated attack. Who hit Jonathan with a hammer? And why is DS Jack Weston so rattled by this case?

Soon falling under suspicion are Jonathan’s dutiful and respectable wife, Tanya Moxton (Charlie Brooks), paranoid schizophrenic Saul Hammond (Dominic Power) and Saul’s appropriate adult Sadie Burns (Katie Jarvis). Uncovering more of Jonathan’s secrets leads the team to Nate Turner (Luke Newberry). When a second man is found battered with a hammer, Martha, Jack and Charlie are horrified – this time the attack is fatal. Is Saul Hammond – whom they let out on bail – responsible for both attacks? As the investigation unfolds, drug-user Carol Collins (Claire Cooper) also comes under the spotlight. The team must catch this serial offender before they strike again.”

An impressively talented cast, improvising their own lines, in an incredible 2 hour story, leads us to ‘suspect’ the return of our favourite cop show is going heart thumpingly good.
We can’t wait.

To keep up to date with the latest Suspects news at it happens, follow @DMolonyForum and @SuspectsTVShow on Twitter and join us at the Forum.

Suspects is produced by Newman Street (part of FremantleMedia UK) for Channel 5.