‘CRASHING’ finale review: We laughed, we gasped, we gave a fork – but how did it all end? 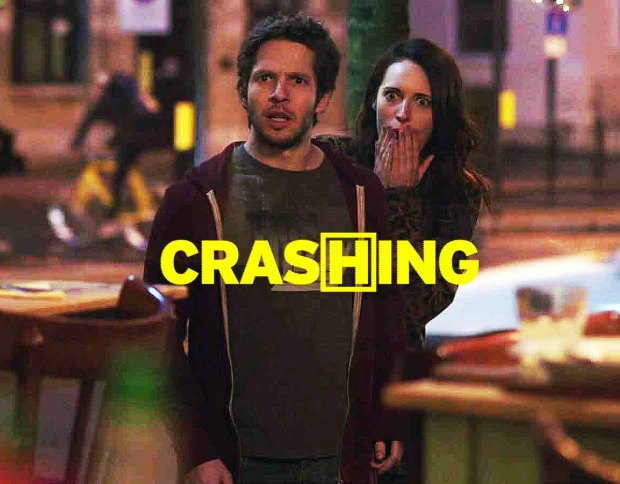 Phoebe Waller-Bridge’s new situation comedy for Channel 4 about a group of twenty to thirty-something property guarding friends came ‘crashing’ onto our TV screens six weeks ago and we’ve been following their lives and loves since. Superbly written and performed, Crashing has been an entertaining, engaging, original, off beat and sometimes outrageous series, with a well paced arch of ever-escalating tensions, and characters and relationship we’ve invested in. 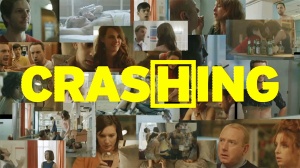 So how did it all end?

Kate (Louise Ford) ran away to drown her sorrows over Anthony (Damien) and received advice, and a full on smooch, from Jessica (Susan Wokoma). (Gasp!)

Fred (Amit Shah) ran away with Kate to drown his sorrows over Will (Lachie Chapman) and Sam (Jonathan Bailey), ending up in hospital where his “little prince” Sam kissed him. (Gasp! Aw!)

Melody (Julie Dray) dresses up in a nurses outfit and breaks Sam out of his grief denial. (Ooh la la! Go Melody!)

Colin (Adrian Scarborough) ended up in hospital after falling out of Melody’s window, and told his visiting ex wife she was “my Melody”. (Aw! Yay!)

The details
(Totally DaMo-centric, Antholulu recap but with massive respect for the whole show)

Following the buildup of preceding weeks, as the final approached the biggest unanswered question for was how would it all end for Anthony, Lulu and Kate.

Ballsy, bold and laugh out loud hilarious, Crashing has also been subtle, layered and utterly moving – often all with one brief scene – and the finale’s opening was no exception. In just a few seconds we were presented with what looked to be the crunch point for Anthony and Lulu.

“Have you loved me every day of your life since you were fourteen?” (gulp) which was not only a question from Anthony, but an admission too. And so was “Do you think of me every time you have a fanny gallop?” (giggle). 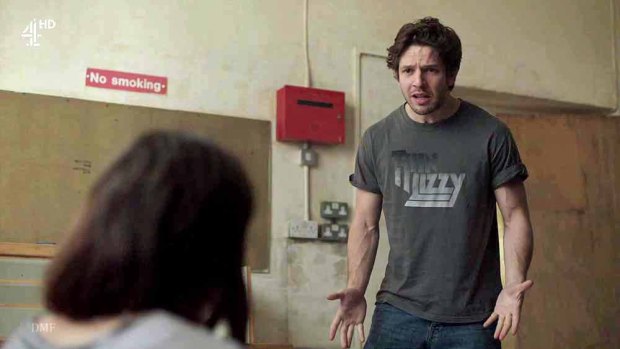 Is this the big moment for Anthony and Lulu?

But Lulu tells Anthony, almost convincingly, she is not in love with him and the scene, almost, has us recalibrating our perception that Anthony has been in love with Lulu all his life since the age of fourteen too. Almost…..

Lulu then supports a worried Anthony in looking for Kate, telling him “that’s what I’m here for” but it’s not long before the cracks begin to show in her denial and the chemistry and compatibility between the two, increasingly obvious across the series, begins to surface.

When the pair find Kate, she is kissing Jessica who is trying to persuade her that her relationship issues might be because she likes women. A shocked Anthony quickly assumes Kate is a lesbian and despite seeing that all was not as it looked, Lulu doesn’t correct him.

Until now, from the moment she arrived, both he and Lulu have battled not to confess their true feelings or act on them and the resulting tension has filled the series.

Their scenes together have been peppered with long lingering looks and game playing, misinterpretations on both sides, with true feelings fleetingly surfacing before denial kicks back in.

Lulu has been a sounding board for Anthony many times and steered him towards Kate. But when she is drunk she has blurted things out ‘as a joke’ that have deeper meaning, or acted in ways that have threatened to sabotage Anthony and Kate’s relationship.

Anthony has tried to carry on as normal, telling Lulu not to rock the boat with his relationship with Kate, but when they are together his true feelings surface easily and he begins to lose control over the cosiness of the life he and Kate have created.

In the next scene after seeing Kate kiss Jessica, it becomes clear that this shiny eyed chat with Lulu is the turning point for Anthony, and when Lulu joke challenges him, he calls her on it – “Come on then. let’s fuck!” (O.M.G. GASP!) – because now he is free to act on the feelings he has not had since he was fourteen. (At all).

But Crashing‘s clever writing, especially in relation to these two childhood friends, is too subtle and layered for everything to be that straightforward, and just when we think the ‘will they / won’t they’ question underpinning the whole series is about to be answered, Kate has gone home looking for Anthony, and it looks like the ‘big moment’ between him and Lulu may never happen after all.

That cunning little plot device has us fist punching the air when Anthony decides that this actually is the point of no return and grabs Lulu’s arm to stop her from leaving.

it’s a triumphant moment, with the soundtrack kicking in, when Anthony and Lulu run hand in hand to an unused part of the hospital, in a room overlooked by the giant old clock face, (symbolic perhaps?) and finally THE big moment arrives. (GASP!)

THIS is the Big Moment for Anthony and Lulu

ANTHONY
Do you love me?

ANTHONY
Just shut up. Do you fucking love me Lulu

ANTHONY
Did you come all the way here to break me and Kate up?

ANTHONY
Do you want to be with me?

ANTHONY
Fuck! This is going to be a disaster isn’t it?

The first totally truthful moment between Lulu and Anthony is a touching and passionate scene where their feelings are finally expressed and released. And when it happens, the complications of all that went before seem suddenly simple, they resisted and didn’t want to mess up the status quo, but they are more right for each other than Kate and Anthony could ever be.

But in the context of the show or of their history, could it ever really be that simple? Of course not! The next morning Lulu wakes up alone, while Anthony appears to be carrying on as normal, making breakfast for the gang and for Kate. (wtf!)

When Anthony goes to Lulu’s room to tell her about Kate not being a lesbian after all, looking for reassurance about what to do, all of his insecurities and their mutual misinterpretations return. Lulu tells him to make up with his fiancée and he asks her not say anything to Kate about last night. (Noooo!)

But, actions speak louder than words and they end up kissing in the kitchen with Kate just in the next room. (Gasp!)

The final word of the episode, and of the series, is given to Kate, who almost walks in in them mid lip lock. (Jaw dropping GASP!)

Kate has the last word…

This unexpected, glorious twist of a cliffhanger is a fitting end to a genius first series. We can only hope for a second, and an opportunity to find out what happens next for the Crashing gang.

Channel 4: we laughed, we gasped, you made us give a fork and now we want more.

What are your thoughts on the Crashing series finale? To join the discussion and vote in the poll, click here

‘CRASHING’: Series Finale Teaser Clip – Is this ‘The Moment’ for Anthony and Lulu?

‘CRASHING’: 4 spicy delights on the menu in episode 3

Crashing Review: Damien Molony lights up the screen in electric episode 2 – and We Don’t Give A Fork!