Our first look at Suspects Series 5 is here! 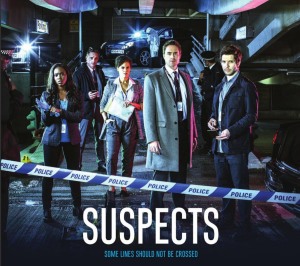 An exclusive new poster for Suspects Series 5 has been revealed on the front page of Worldscreen’s Digital Mag for TV drama at MIPTV 2016. The global TV and digital content market takes place in Cannes 4 – 7 April and Suspects is part of FremantleMedia International’s global drama slate.

The slick promo gives us our first glimpse of the exciting new line-up in the upcoming series, which we reported on in December last year.

Damien and Clare-Hope Ashitey will be returning as DS Jack Weston and DC Charlie Steele, and are joined by three new lead cast members, Lenora Crichlow (Being Human, Back In The Game) as DS Alisha Brooks, James Murray (Cucumber, Defiance) as DCI Daniel Drummond and Perry Fitzpatrick (This Is England) as TDC Gary Roscoe.

Very little has been revealed about series 5 so far, but the new poster confirms big changes are coming for CID team 1, most noticeably the absence of DI Martha Bellamy, played by Fay Ripley in series 1 – 4.

Expected to premiere in 2016 and comprising six episodes, the UK air date for the fifth series of the unique crime drama is yet to be confirmed.

Watch this space for news as we get it!

Suspects Series 5 will premiere in 2016 (air date tba) and is produced by Newman Street (part of FremantleMedia UK) for Channel 5.

To join the Suspects Series 5 discussion with other fans, click here