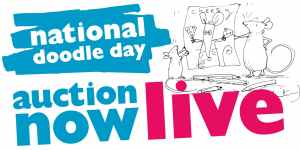 Damien has joined other celebrities in adding his personal doodle to Epilepsy Action’s National Doodle Day, an online celebrity auction held annually to help raise much needed funds for the charity. 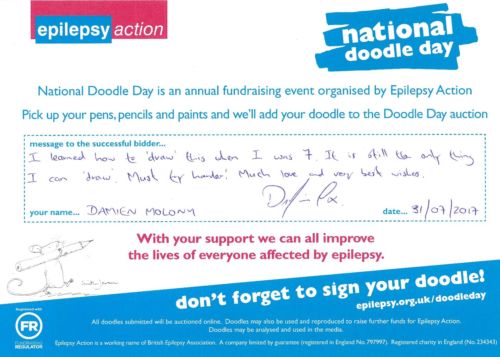 Original doodle created and drawn by Damien Molony
Damien Molony is an Irish actor, best known for his role of Hal Yorke in Being Human and D.C. Albert Flight in Ripper Street.
The doodle is signed and drawn on an official National Doodle Day card (A5, 148mm x 210mm). The personal message on the reverse reads: “I learned how to ‘draw’ this when I was 7. It is still the only thing I can ‘draw’. Must try harder! Much love and very best wishes”
All money raised from the National Doodle Day auction is in aid of Epilepsy Action, a registered charity in England (No. 234343).
For updates on the National Doodle Day celebrity auction, join us on twitter @DoodleDay #DoodleDay.

The auction runs from Friday 22 September to Sunday 24 September, bid now for your chance to win Damien’s original doodle and support this important charity!