Damien was the ‘Big Interview’ star on the latest #What2Watch broadcast.

Our fave actor talked about his upcoming Sky One comedy Brassic, sharing more about the surreal comedy in the show, the characters, their capers and his co-stars. We were also treated to exclusive and as yet unseen clips of his character Dylan.

.@damienmolony tells #What2Watch just what the word #Brassic means and what filming the show was like pic.twitter.com/SzcHWbyyjy

Brassic is rhyming slang, it means skint, obviously I didn’t research the etymology of it. I remember auditioning for it, I was like ‘is this something to do with cabbages?’”

Filming this show I think every day I did something for the very first time in my life. We got up to so many crazy things…we called them capers even though it’s dangerous and we could all die at any moment. There is such a sense of fun being had by all of us and that translates into 6 or 7 actors on set just having the best time of their life.”

In Brassic it’s 6 best pals who run around town having the time of their lives getting up to mischief, so they’ve no interest in leaving, the flipside to that is Michelle Keegan’s character Erin, who is absolutely hell bent on leaving town and finding this carer and providing for her 4 year old son.”

I had very little knowledge of bi polar disorder really before filming and Joe is really kind of so open from the get go, you know, mainly its ‘I’m having a good day’, ‘I’m having not so good a day.’ Watching him deal with this disorder on a day to day basis was I think fascinating for all of us because you get a real sense obviously of what he’s going through, but also in terms of for the shoot and our characters to respond in a truthful way to a character who has bipolar disorder.”

Check out the full interview below, Damien appears at approx the 14 minute mark.

LIVE: @DionneGrant and @scottygb are reviewing #Succession and #DeepWater, plus talking to #Brassic star @damienmolony 🤩 https://t.co/gqSJgfXO3m 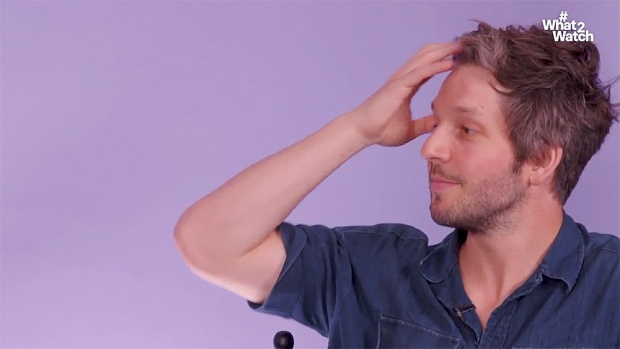 “Great interview, he had great hair too.”

Thanks to #Whats2Watch for a fab and fun interview. Dionne Grant summed things up nicely with, “Great interview, he had great hair too.”

Brassic episodes 1 and 2 air on Sky One 10-11pm and 11-12am and the complete series boxset is available to stream on Sky One and NOW TV 22 August.

← Damien Molony as Dylan Colding: The Indiana Jones of Brassic NEW INTERVIEW, PREVIEWS & MORE!
Damien Molony: from Kildare to the top of British TV – “both a lover and a fighter” →