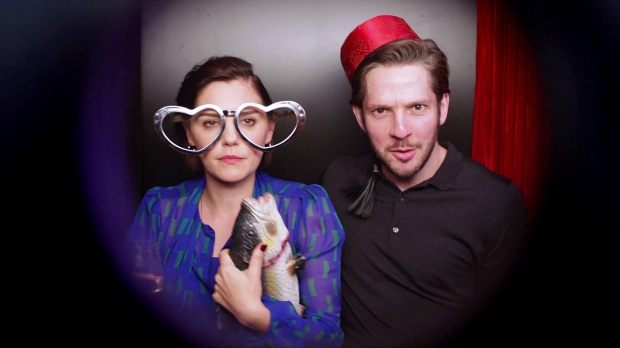 (Fair warning: The following contains spoilers for The Split series 2, episodes 2 and 3!)

Damien is currently appearing as Tyler Donaghue in The Split on BBC One, now half way through the second series.

What is the Tyler Donaghue story so far?

Personal and professional lives collide in The Split and if an underlying theme can be found in this series it would be the secrets people keep and the lies they tell others – and themselves – to keep them from being revealed.

As the new arrival at Noble Hale Defoe, we know little about Tyler Donaghue (Damien) other than he has been brought in by manager Zander (Chukwudi Iwuji) as a consultant for the newly merged law firm, that he and Zander are engaged after meeting in Chicago.

Given free reign to examine the working practices of each staff member in order to “cut fat”, Tyler has ruffled feathers right across the board, assessing client choices and income potential as he accesses work emails, watches and listens in the background, lurks in corridors and doorways.

As Tyler continues to look beneath the surface of NDH to discover the truths about the team, his scrutinising gaze is largely directed at Nina Defoe (Annabel Scholey). When Nina’s spiralling struggles with alcohol and a surprise pregnancy begin to affect her at work, things are not helped when Tyler keeps popping up wherever she is.

There is a growing intensity and suspenseful chemistry between the two characters, and in episode 2 they begin to challenge each other more. After she comments on Tyler’s past at a staff drinks night organised by him and Zander, back at the office Tyler confronts Nina on her constant lateness, suggesting he will advise Zander to “rationalise” if “the books don’t balance” in terms of “productivity and passion” and asks her if she has joined the AA. But he may have pushed her too far, the episode ending with Nina getting caught shoplifting.

What happened in episode 3?

For us fans there could never be enough Damien in anything, and in the latest instalment of the legal drama quality over quantity is certainly the case for Tyler appearances. His scenes are few, but they are intense and enthralling, and almost exclusively with Nina.

While Nina comforts a distressed client in the male bathroom at work, Tyler overhears and silently gives her a nod in the mirror – a brief moment of connection and perhaps recognition, as she gives advice about addiction she could easily have given herself.

As Damien fans it is of course not lost on us that both he and Annabel Scholey played vampires in Being Human, but it is their stunning performances and vivid embodiment as Tyler and Nina, not the mirror reflection in this scene that puts us right in the heart of them, and not Hal and Lauren.

And reflections are a theme right across the episode. In a brief exchange during a fire drill, Tyler quips, while vaping, “the hard stuff gets you arrested” to Nina the morning after she was arrested for shop lifting. Things that are said in the episode’s legal cases mirror situations in Hannah and Nina’s personal lives; a relationship formed by Will in rehab that was fantasy and “wasn’t going to last”; Nathan is brought into help with Hannah and Christie’s ongoing case with Fi Hansen (Donna Air) who is “hiding something”, like “most people are”.

The big event of this episode is Hannah (Nicola Walker) and Nathan’s (Stephen Mangan) 20th wedding anniversary party, where all kinds of secrets begin to emerge. Hannah is still trying to maintain the lie of her affair with Christie (Barry Atsma) to Nathan (and maybe to herself), attempting to keep control of the situation and to avoid exploding everything in her marriage and her family’s life. Christie is angry, and angrier still when he finds out a secret about his and Hannah’s past, causing a confrontation at the party, witnessed by Nathan.

Oh and we see Damien dancing!

Tyler and Ruth (Deborah Findlay) dancing at Hannah and Nathan’s party in The Split 2.03

The most significant scene in episode 3 from a Molonian perspective is between Tyler and Nina, in a photo booth, at the anniversary party. It is a short but weighty scene, undeniably fun and shiny, but filled with deeper underlying pathos and heaps of hidden heart.

Tyler joins Nina in the photo booth at Hannah an Nathan’s party in The Split 2.03

When Tyler tells an annoyed Nina he doesn’t “like to see a good thing go to waste”, he doesn’t mean the photo booth and when Nina tells him she is pregnant, she doesn’t just reveal her secret to make him shut up.

Tyler and Nina in the photo booth at Hannah an Nathan’s party in The Split 2.03

Tyler is the mysterious, annoying outsider, yet Nina’s first confidant outside of the family, intrusive but also perceptive, and who beneath it all might actually care a little. Nina is both strong and vulnerable, independent but tragically alone, who might reluctantly begin to realise that this “irritating” man might actually ‘see’ her.

Nina reveals her secret to Tyler in The Split episode 2.03

The chemistry and connection between the characters subtly transitions into something else, and while we are not sure what that is yet, it oozes off the screen.

Meanwhile, ahead of the couple’s wedding, on the request Zander, Christie (Barry Atsma) and Ruth (Deborah Findlay) have begun looking into Tyler’s background and assets and we find out that he is a sizeable amount of zeros in debt.

Could Tyler’s final words to Nina in this episode be more than a throwaway comment: “I know I look like I love it, but it’s all fake.”

What is coming up next?

We are left with big questions and even deeper intrigue about Tyler, and feel fully invested in whatever comes next for him and Nina and their volatile but growing bond. Now that secrets are out, we can’t wait to watch the story continue to unfold in the second half of the series.

The Split series 2 episode 4 airs 9pm Monday 2 March on BBC One, with the entire series available to watch on the BBC iplayer.

Have you seen Damien in The Split series 2? What did you think? Join the discussion and vote in the polls here!