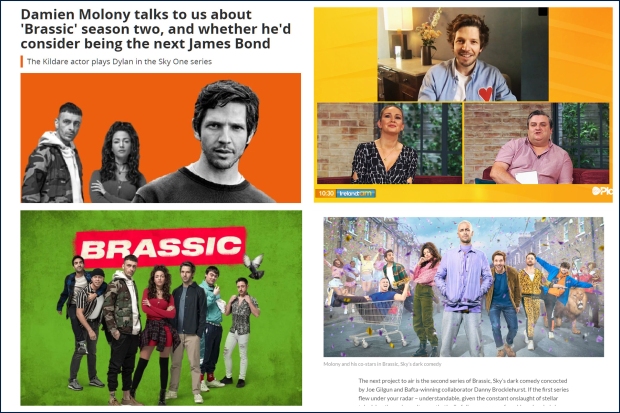 Exciting news Molonians – lots of new Damien interviews have arrived ahead of the Brassic series 2 premiere on Thursday 7 May!

Our fave actor not only appeared on Irish TV show Ireland AM at the weekend (watch here!), but also features across Irish press publications and online media to talk about his upcoming show.

These are full to brimming with awesome new insights from Damien on Brassic series 2,  the affect of the pandemic on the TV industry and filming series 3, and even hints at a new project! He also reveals how he is spending life in lockdown.

First up, a wonderfully in-depth interview with Shilpa Ganatra at the Irish Business Post.

Interview: Damien Molony on television drama and being one of the gang | Business post Ireland 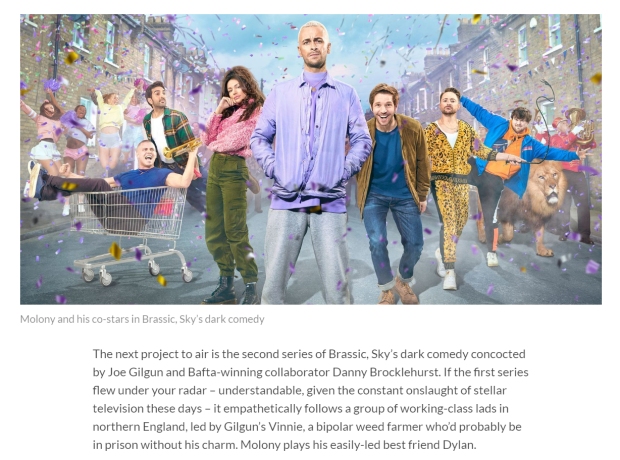 I was doing a reading with [British comedian] Kathy Burke a couple of weeks ago and she joked, ‘look at you, working with all the best women’

On lockdown life and DIY disasters

The DIY has been a disaster…It turns out I’m good at hanging paintings crooked, and I’ve destroyed the bamboo bush in our garden.”

Joe (Gilgun) said that when people watch Brassic, he wants them to think, ‘I wish I was in their gang…You’re almost living vicariously through this gang, who are not cool, and who always screw up. But they’re close friends and they’re having such a great time that you can’t help but want to be one of them.”

When I think about my time working on it, what stuck with me is how well we got on outside of filming…The show came out every Monday night, and every week we watched the episode at a different cast member’s house, and they’d cook for us. It came out just after Christmas so everyone was doing dry January . . . or not in this case. At that point, she was such an unknown entity. We had her to ourselves before the whole world took ownership of her…I was at a wedding recently and one of the speeches was based on Fleabag. I sent her a text saying ‘Jesus Christ, you’re writing wedding speeches now’. It’s amazing how she’s managed to capture what everyone wants to say, but is too afraid to say – and that goes for men and women. When you watch her work, the revelations are unexpected, but always inevitable.”

On his journey into acting

although I remember being very shy as a teenager…I was good at performing plays when the audience was my parents, but when it became my peer group, I was nervous about what people would think. The people I met [at Trinity college while studying for business and politic degree] were taking a play to Edinburgh, so I ended up going to the Fringe Festival with them. That’s where I found out that people were applying to drama schools in London. I didn’t even realise that was possible.”

On welcoming his baby daughter during filming Brassic series 2

The crew were very accommodating. And when I came back, they gave me an extra 20 minutes in the make-up chair for the bags under the eyes..I moved my family back to Dublin while I was in Manchester filming, so every Friday night I’d fly back to Dublin and spend time with them, and go back on Sunday evening to film. We moved back to London in January.”

On the effect of the pandemic on the TV industry, filming Brassic series 3 and another comedy project (as yet unannounced!)

Every industry is struggling at the moment, and the fact that we’re all in it together makes it slightly easier it,” he says. “I had a TV comedy project in May that’s been pushed to the end of summer, and the third series of Brassic is supposed to start filming end of July, so who knows whether that will happen, or whether it’ll be pushed.”

Next up, another in-depth piece from entertainment.ie, which get extra points for the James Bond question! Warning for Brassic series 2 spoilers!

Damien Molony talks to us about ‘Brassic’ season two, and whether he’d consider being the next James Bond | Entertainment.ie

On Brassic and his character Dylan

Dylan is basically the brains of the gang. You know if everyone had a role in the show, he’d definitely be “the brains”. He’s probably the most reluctant of the crew, to be involved – he’s smart enough to see the flaws in their various plans. But he’s also very easily lead, and arguably he’s always happiest when he’s in the middle of it all.

In series one, he had quite a dilemma on his hands. He has a huge sense of loyalty to Vinnie and his friends, and he loves being part of that. But also, he’s in a relationship with Erin (Michelle Keegan) who is really driven, ambitious, and wanted to leave town and make a success of her life. Dylan in series one is caught in between who he’ll choose – desperately trying to please both of them, and that’s never going to work. But then in series two, Dylan has realised the error of his ways, as he’s potentially lost Erin as the love of his life. So he’s gone to college to become that responsible adult I guess that Erin wants him to become, but he ends up falling for another girl. So there’s lots of conflict and lots of dilemmas.”

On Brassic being a ‘crazy’ show

..when you think getting shot at by a farmer as you steal his Shetland ponies is as wild as the show could get, but that was only episode one of season one! So in series two, we’re trying to steal a whole circus. That’s what’s so fun about getting to play Dylan in this crazy show, because you get to do car chases, and robberies, and it’s just wild which is obviously really great fun to film.

In series one, hardly any of the actors could drive so anytime we did any highspeed chases, the car was either being pulled along by another car or there was a stunt driver on top of our car in complete control of the steering wheel and the accelerator. But for series two, they just stuck us in a green screen studio to make lives easier. And we all felt so ridiculous doing this!

Yeah it has. And I think they’re all writing away at the moment. And it’s funny, in series two when you’re on set filming at three o’clock in the morning and you’re out on a hillside, it’s lashing rain, and it’s only three degrees… everyone said “Joe, if we get a series three, please write us an episode in the south of Spain where we just go on holiday. Just for one episode!” – so I don’t know if he’s written something that’ll allow us to go off to Spain. It would be so funny, and sure the actors would love a bit of sunshine too.

On Brassic being a ‘balm’ in these times of isolation

I watched the first two episodes of the new series last night, and it really struck me how much I miss my friends and how much I’m looking forward to filming the third series. But in a world of isolation, anxiety, and social distancing, ‘Brassic’ series two is a real balm for that. It’s laugh-out-loud funny, good-natured, and a warm-hearted show. And in a world where we can’t see our mates, it was just a lovely, charming show to watch.

On working with Phoebe Waller-Bridge in Crashing

In a similar way to ‘Brassic’, the series was an ensemble show that was very much friends that you make on set and you keep off set. I had such a great time making it that when ‘Crashing’ came out on TV, we actually went around to each-other’s houses to cook for the crew and watch the new episode. So episode one was in my house, and then the final episode was in Phoebe’s house and we kind of all stayed in touch and are really tight.

On preferring to be a villain in a Bond film

Oh my god, never say never! That’s what’s so great about this industry is that every job is different. Last year I was a driving instructor, a management consultant, and a drug dealer! It’s a whole new world of experiences and of characters. But I think in terms of ‘Bond’… I’d rather play the baddie in that one.

Oh you know I’ve been trying to catch up on ‘Episodes’ with Tamsin Greig over the past few weeks, I missed it the first time around. I’ve also tried my hand at some dreadful DIY at home, and other than that just trying to to keep fit, and entertaining the kids is a full-time job too.

Finally, a Damien interview in the Irish Sun. (Forgive us if we skip the sex scenes headline for a slightly less overdone and more relevant one!)

On not being typecast and the variety of roles he plays

[it would be] an actors worst nightmare…It’s great to play so many different types of characters. From being a boring driving instructor in GameFace to a ruthless management consultant in The Split and now a drug dealer in a gang with a heart of gold in Brassic.”

The pandemic and Brassic series 3 filming

We’re meant to be filming series three at the end of July this year. At the moment they’re writing it and there’s no word on if there’ll be a change. Hopefully it won’t be too much longer. People in the industry are figuring out ways to get around lockdown restrictions, with the cast isolating before filming and using a smaller crew. We’ll wait and see if the powers-that-be allow us to do it sooner rather than later.”

On his Brassic co-stars

We all really hit it off. Joe (Gilgun – co-writer and creator) took us all out for dinner before we began filming to get the bonding process started. So we had all had a night out before we even started. We all live in the same apartment block while we’re filming. So we’re all close. It’s a good gang.”

These are just a selection of the many Damien interviews and media mentions in recent days. Watch this space for more as they happen!

Brassic Series 2 premieres Thursday 7 May on Sky One, with all episodes available on Sky and NOW TV.

Keep up to date with all of the latest Brassic series 2 news here!