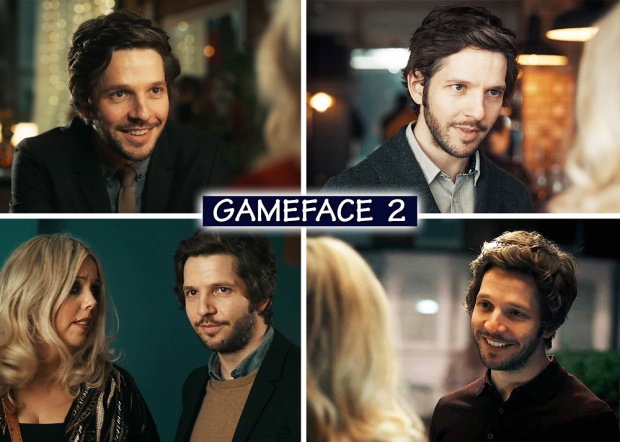 GAMEFACE SERIES 2 REVIEW – The Top 10 Damien Molony & Joncella Moments!
damienmolony.org | 19 August 2019
“With more layers than a pizza and definitely not a spud, gorgeous and glowy GameFace 2 leaves you knowing you have been watching something beautiful. But don’t let that fool you into thinking it’s all light and fluffy, it’s BRILLIANT comedy, utterly original, cleverly constructed and unexpected in a way that you cannot know what is to come next, or even begin to guess, because you’re too busy laughing, reeling from an event, a twist, or revelation. There really is nothing else like it.”
“Damien’s quieter, more bashful, Jon has an intriguing intensity and Damien plays him with magnetic authenticity and such subtlety. His feelings for Marcella are pushed to their limits from the outset, and still not overtly stated, more conveyed through his expressions and actions, and in this series, always given away by his eyes.”

The week in TV: The Handmaid’s Tale; GameFace; Poldark and more
The Observer – Euan Ferguson | 19 July 2019
“A handsome round of applause for the welcome return of GameFace, Roisin Conaty’s filthy and intemperate Fleabag for the working class.”
“Glisteningly written and fun throughout…”

**** GameFace, series 2 episode 1 review: who cares if it’s not as cool as Fleabag, Roisin Conaty’s sitcom is full of laughs
The Telegraph – Michael Hogan | 17 July 2019
“GameFace remains big-hearted, hopelessly romantic and hugely likeable. It might not be as fashionable as a Fleabag-style sadcom but it delivered laughs and left a warm glow. You know, like comedy used to.”

**** GameFace, Channel 4, series 2, episode 1, review: Roisin Conaty makes smart comedy look easy
iNews – Sarah Hughes | 17 July 2019
“This series is both very funny and properly smart. The characters are well drawn and the scenarios feel grounded in a very specific type of London reality – of a woman who grew up in the city and has the accent to prove it. It’s the kind of comedy – both very broad and carefully specific – that’s incredibly difficult to get right. Conaty makes it look easy.”

****GameFace review – irresistible comedy that’s all heart and silliness
The Guardian – Rebecca Nicholson | 17 July 2019
“This is proper, silly comedy that packs in the punchlines and dances around absurd setups, leaving a sense of joy in its wake.”

GameFace Series 2 Episode 1 Review
Chortle | 17 July 2019
“The first half of the opening episode is jaunty, with flashbacks to embarrassing memories ramping up the gag rate, while the second puts more stock on the emotional aspects as Marcella and Jon test out their relationship. Conaty holds this mood longer than you might expect from a comedy – and the atmosphere is eventually punctured by drama, not a joke. It shows there’s some substance beyond the punchlines. But definitely it’s the witty, silly, but-still-grounded-in-reality humour that makes GameFace a winner.”

GAMEFACE SERIES 1 REVIEW – And The Top 10 Damien Molony Moments!
damienmolony.org | 17 November 2016
“a fresh, current, moreish new comedy, not only outrageously funny, raucously laugh out loud and full of hilarious one liners, but also a warm, full of heart, emotionally engaging, quality drama.”
“In Jon, Damien brings a multi-faceted character, who at first appears to be the reliable, steady, rational, calming opposite to Marcella. But he becomes more intriguing across the series and later surprises with a less serious side, revealing a spontaneous streak, with plenty of unexpected humour and disarming charm and wit.”

‘GameFace’ On Hulu: Because We Can Always Use Another Hilarious Hot Mess
Decider | 16 November 2017

“The Brits know how to make a proper binge-watch, keeping each season to only a handful of episodes so that you can breeze through the series and still want more. As we watch to see if Marcella ever lands an acting gig or if she finally learns how to drive, the show delivers enough silly scenarios to also earn the more heartfelt, honest moments that will make you want to give her a hug. She’s like that friend from college that you can only meet up with every 6 months or so to catch up with over wine, but when you do, it’s just so damn fun.”

Rude, raw and slyly romantic, GameFace is the funniest sitcom of the year – review
The Telegraph | 9 November 2017
“GameFace stealthily snuck up to become this year’s best new homegrown sitcom. It’s about “navigating thirtysomething life when you’re underprepared but somehow staying afloat”. A tragicomic portrayal of a woman’s chaotic life which miraculously managed to make debt, depression and loneliness laugh-aloud funny.”

‘Carbs, fags and wine’: Roisin Conaty’s GameFace, a tragicomic portrait of a life unravelled
The Guardian | 14 October 2017
“a big-hearted comedy that manages to make depression and loneliness funny”