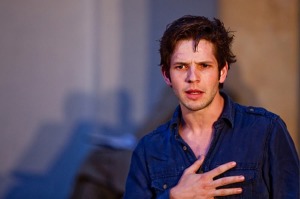 “I went from rarely ever reading plays, to reading one a day. I went from attending the theatre two or three times a year, to two or three times a week. And this was on top of 12 or 13 hours a day learning and honing my craft. I immersed myself. You could almost say I shut myself off from the world, so much was the singularity of my focus.” source

I’ve learned to work my bollocks off. With auditions I read the play twice if not three times before. You work out the story and the character and the corners and the beat changes of the text, and I feel you have to want to try and make it as specific as you can, that this is Damien’s version of the character.” source

I knew [I wanted to be an actor] from about 3 yrs old, we got a set of curtains with a cord that you could pull and the curtains would open, it reminded me of a theatre and it was all from that moment really. I wouldn’t be here today without the support from my family and friends, my family have been right behind me and they have been great.” source

I wanted to act all my life. I know it’s a cliché to say it, but it was something I knew I was good at and loved…I remember when I was four years old we got curtains and I thought it was like a pantomime. I borrowed my mums mascara and wrote Goldilocks and the Three Bears on them – we don’t have those curtains anymore.” source

When you’re on stage a deep breath is very much physicalized and in the body, whereas you can almost breathe through your eyes on television; you don’t get that on stage” source

There is nothing like hearing the noise behind the curtain before a show. I’m not too much into bows though, I don’t like bows. I feel very self-conscious because that’s you going on stage. But before the show starts, behind the curtain you can hear the excitement, it’s just amazing….My favourite part is when you hear all the tech people saying “stand by” and it’s when everyone is coming together to make the show and it’s beautiful.” source

The best bit is working together [on stage] with the company to try and tell a story to an audience that has never seen it before, and the volatility of that. There’s such an onus on actors and audiences alike to listen to everything that’s happening around them. That live nervousness and excitement every single night is something I will never tire of and I hope I never lose.” source

A great actor is a great listener. And that’s something I am learning. Listening is the key. You can’t react truthfully unless you listen. If I could have brought that to every show I’ve done so far I would sleep easier at night. Listen every day. Just as the curtain comes up, I always say “listen”.” source

There was a great speech at the start of the Young Vic’s Faust. There was an old man in a nursing home saying “I’ve played Hamlet, I’ve played Richard II, I’ve played Lear, I’ve played them all.” I was sitting there thinking “That is what I want to do.” I want to be able to look back and say I’ve played amazing parts, worked with great actors and amazing directors. That sounds very cheesy, but that really struck a chord with me …” source

For as long as I can remember, watching television and film was my comfort area, my happy place. I would happily watch films over and over again, learn the lines and be able to repeat them, play out the final fight scene in Robin Hood: Prince of Thieves; I was mesmerised by the magic of film. I was introduced to a lot of old movies when I was younger and I have memories of watching Singin’ In The Rain, My Fair Lady and Mary Poppins. I guess I was spellbound by these magical Hollywood films. When I was growing up the last thing I wanted to do was go to the theatre but over the years this has completely changed, and now I try to go to the theatre once or twice a week.” source

Films are really my first love and I would like to work in more films. I would love to work with Steven Spielberg and Martin Scorsese who are on my list of dream directors. I also want to continue working in theatre. In terms of a role I’d like to play, I’d love to continue being challenged, being inspired.” source

I still pinch myself when I’m on set or when the director calls ‘Action’ or the curtain opens on stage. I’ve got butterflies in my stomach even now talking about it.” source