Damien’s upcoming film Tiger Raid is due this year and we’re excited to have an incredible first glimpse of his and co-star Brian Gleeson’s characters in the movie.

The production company Story Film released exciting first images via their official website and kindly allowed us to share.

Since the first mention of the project in 2014, we’ve been gathering lots of juicy info on Damien’s upcoming movie.

Here are 10 things we know about the film so far.
(Updated as new information arrives!)

First up, the film has its official title: Tiger Raid. As the name suggests, the movie’s overall theme is based on a ‘Tiger Raid’ or ‘tiger kidnapping’, defined in Wikipedia as follows: “A tiger kidnapping or tiger robbery involves two separate crimes. The first crime usually involves an abduction of any person or thing someone highly values. Instead of demanding money, the captors demand that a second crime be committed on their behalf. The second crime could be anything from robbery, murder, to planting a bomb. A person or item held hostage is kept by the captors until their demands are met. The goal of the captors is to have their risky-dirty work performed by another person.”

The film is set in Iraq and based on the relationship between two Irish mercenaries as they undertake a kidnapping, discovering more about each other as they journey together across the desert.

The official synopsis from Story Film:

Other sources describe the film as a thriller, a drama, but also hint at action elements and an adrenalising plot. As well as the movie having a dark tone, we can also expect a black comedy.

“Two rogue Black Ops for the US army..decide to take an oil Sheikh’s daughter hostage in Iraq.” Mayonews

“‘Tiger Raid’ could be compared to such black comedies as ‘In Bruges’ and ‘Seven Psychopaths’.” Mayonews

Early indications are that the main focus of the film is the relationship between the two lead characters, with the events of the kidnapping being told through their shifting dynamics as the story unfolds. Such close-up emphasis can only mean lots of screen time for our favourite actor.

4. From stage to screen

The screenplay is based on the play Radio Luxembourg by Irish writer Mick Donnellan.

The play ran at the Galway Fringe Festival in Ireland in 2014 and was snapped up by production company Story Film to adapt for the big screen.

5. Raiders of the black mask

Now we have had our first pulse quickening peek at Damien and Brian Gleeson’s characters as Paddy and Joe, we can’t go any further without comment on their look for the film.

During the shoot in August last year, Damien dropped the first hint about the film in a tweet, commenting on spending all day in the make-up chair – the new images finally reveal why.

Spent all day in the make-up chair... http://t.co/wSQ5lUhLRg

The visual impact of the characters’ bandit-like blacked-out eyes is immediate – mysterious, intense, menacing, scary even, intriguing. Perhaps also symbolic of the suggested slice of darkness within both of these men.

Although set in Iraq, Tiger Raid was filmed in the scorching temperatures of Jordan. According to director of cinematography Si Bell, specialist cameras had to be used to cope with the heat.

Mick Donnellan, who was on set through the shoot, commented on the actors’ dedication even in the immense heat:
“Speaking about the actors, Mick said they were all ‘really invested in it’ and that even in 50 degree heat in army costumes, they didn’t complain.”

In contrast to the up close focus of the film on the two lead characters, The epic, vast, barren and scorched desert landscape provides a stunning backdrop for their journey, and from what we know of Tiger Raid so far, will add to the tone and flavour of the film. In combination with the striking make-up of the characters, the film is set to be visually stunning.

7. Profound Soundscape
The film score is created by award-winning composer Dean Valentine, whose credits include music for Lord Of The Rings, The Hunger Games: Catching Fire, Fury and Prometheus trailers.

A briefly available tantalising teaser from the soundtrack revealed the film will have a soundscape as powerful and atmospheric as the imagery we have seen so far. Both promise a shadowy, haunting and profound tone to the movie.

A thriller with a story, the film is also going to have its fair share of action. Damien and Brian Gleeson’s characters are special ops with a military background and both actors received specialist training for their roles.

Jordan based MissionX, specialist military consultants to the film and TV industry (who have worked on a number of high-profile action / drama films including Rosewater and Monsters: Dark Continent) gave them training during filming to help bring authenticity to their characters. 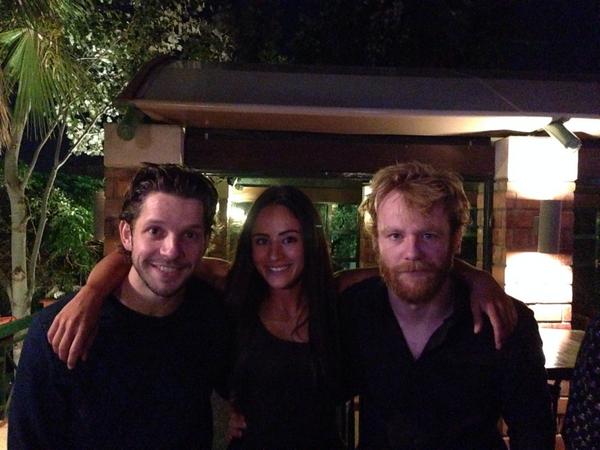 The film has as strong Irish foundation from concept, to creation and cast, but was made in Jordan, has an international feel in terms of location, plot and storyline, and Tiger Raid is well set to engage a world-wide audience.

The Irish Film Board took the movie to the Berlin International Film Festival in 2015 and 2016, one of the world’s leading film events and the largest film market internationally.

Tiger Raid is due for a 2016 world premiere at a film festival and will be released in 2016.

We cannot wait to see Damien on the big screen and eagerly await Tiger Raid. Watch this space for more news as it happens!

Huge thanks to Story Film for the kind permission to share the images.

Tiger Raid is directed by Simon Dixon, written by Simon Dixon, Gareth Coulam Evans and Mick Donellan, produced by Story Films and Samson Films, co-financed by The irish Film Board and Ingenious and international sales are handled by Bankside Films.

For more info on Damien’s upcoming film and to discuss with other fans, click here.