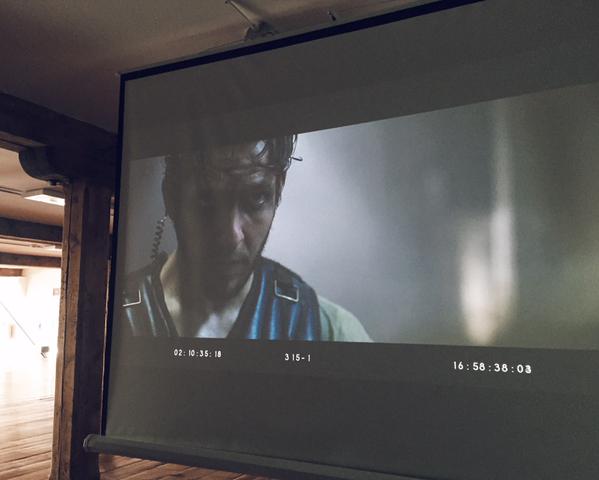 Tiger Raid is near completion and Story Film have kindly shared an exclusive glimpse of Damien in the movie with us.

Revealed earlier this year, the first official photos of his character Paddy – with dramatic bandit-like blacked-out eyes – already had us intrigued and excited for the film.

But the new sneak peek at a dark and intense Tiger Raid still from post-production footage posted by Story Film on Twitter, has us thrilled and enthralled.

So happy to complete the sound on the wonderful feature Tiger Raid starring Brian Gleeson. An intense mix for an intense film! #TigerRaid

Further tweets from Dean Valentine confirmed the “dark and intense” nature of the film.

@DMolonyForum thanks,..Ive given the score everything! Be prepared,..to say Tiger Raid is very dark and intense would be an understatement!

Damien plays joint lead role in the film alongside Brian Gleeson, both portraying two mercenaries travelling through the desert planning to undertake a kidnapping in Iraq. Sofia Boutella also stars.

Tiger Raid is set for a film festival premiere this summer. Watch this space for news as it happens!

Tiger Raid is directed by Simon Dixon, written by Simon Dixon, Gareth Coulam Evans and Mick Donnellan, produced by Story Films and Samson Films, co-financed by The irish Film Board and Ingenious and international sales are handled by Bankside Films.

For more info and everything we know about the film so far, click here.