After a cracking debut on Channel 4 last week, Crashing returns tonight for episode 2. 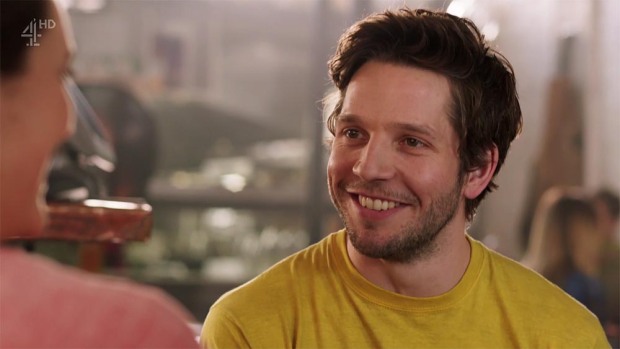 The opening episode of the new comedy drama introduced us to a bunch of characters ‘crashing’ together in a cool London pad – Anthony (Damien) and fiancée Kate (Louise Ford), Sam (Jonathan Bailey), Fred (Amit Shah) and Melody (Julie Dray) – all occupying their very own ‘ward’ as property guardians in a disused hospital.

When Anthony’s ‘quirky’ childhood friend Lulu (Phoebe Waller-Bridge) arrived out of the blue, it became all too clear there are unresolved feelings simmering away on both sides.

Anthony tries to have a mature conversation with Lulu, but the pair continue to hide their true feelings from each other (and themselves) while obviously having sizzling chemistry together. And they are still being far too mutually smiley in their tête-à-têtes for Kate to have nothing to worry about.

The new episode promises more insight into the characters and their uniquely fascinating home, but this time also ventures into their places of work, including in a scene where Sam (Jonathan Bailey) invites Fred to skip work to watch a rom-com.

We’re also treated to our first look at chef Anthony’s restaurant, delightfully named ‘We Don’t Give A Fork’, where French artist Melody (Julie Dray) relishes the no-cutlery concept when she takes Colin (Adrian Scarborough) there for a date.

Watch the episode trailer below.

We can’t wait to see what Phoebe-Waller Bridge has brought to the plate this time and will be tuning in for tonight to see what’s cooking in the new instalment.

← ‘CRASHING’ Premiere: The Damien Molony Forum Review
Crashing Review: Damien Molony lights up the screen in electric episode 2 – and We Don’t Give A Fork! →