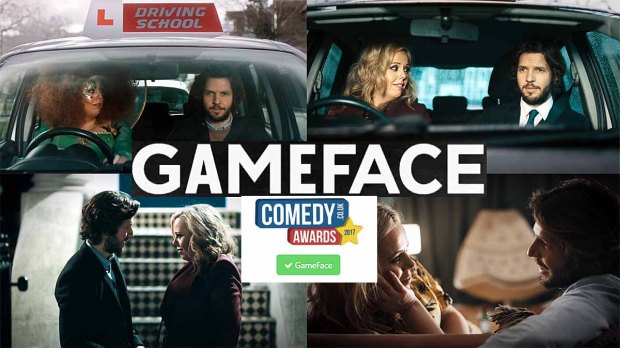 GameFace has been shortlisted in the British Comedy Awards for
Best New TV Sitcom 2017.

Roisin Conaty’s new series is also up for the Comedy Of The Year 2017 award, for best overall comedy.

The shortlist has now been announced for our annual TV and radio awards. 60 shows vie for the Comedy Of The Year title. No judges, fan voting decides it. Take part: https://t.co/FXOVDwjaAt pic.twitter.com/RX5c371VWX

Damien starred in GameFace from October to November 2017 on E4 in the UK, with the six episode series reaching audiences in the US, Australia and New Zealand shortly after.

The comedy was met with critical acclaim with the Telegraph describing it as “the funniest sitcom of the year” and reviews praising its hilarious and heartfelt flavour with a current and relatable lead character in Marcella (Conaty).

And, of course, with the added romantic tension between Marcella and Jon (brought to life brilliantly by our fave actor) we think GameFace deserves ALL the awards. Read the DMF review below.

There is no doubt about it, GameFace was the Best New TV Sitcom and Comedy Of The Year 2017, so let’s get voting and make sure it wins!

To comments and discuss GameFace in the British Comedy Awards, click here

Missed GameFace or fancy a re-watch? Watch it at all the places below!